Petunias Dying In Landscape Beds – A Problem You Might Be Having In The Landscape. 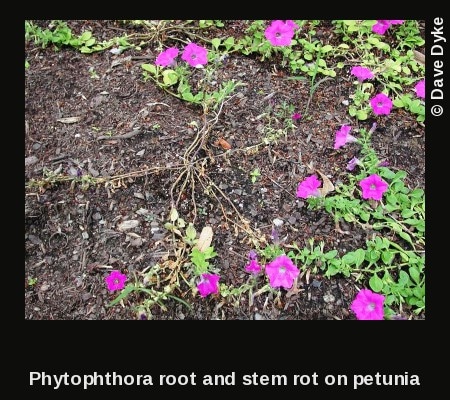 Steve Sullivan of The Brickman Group sent us a photograph , and a manager from Akehurst Landscape Company called in last week to inform us that they have been finding large beds of Wave Petunias that are dying rapidly. As the issue could be caused by a number of presently active botanical diseases, laboratory testing is required to identify the issue.

Recently the Plant Diagnostic Laboratory encountered specimens of several varities of Petunia, including Wave Petunias out in the landscape that were found to be dying of “Phytophthora Parasitica” a fungal disease commonly referred to as “Aerial Phytophthora Blight” or simply “Blight”. This particular disease favors hot, wet weather.

“Phytophthora Parasitica” Appears similar to, and could be mistaken for the following –

The most common symptom of “Phytophthora Parasitica”  is the black base or shank of the stem. Infection is usually through the roots. The roots are initially water soaked then rapidly become necrotic. In young plants, the stems become brown to black and the darkening can extend up the stalk several centimeters down into root system, then the plants damp off. The pathogen can directly infect the leaves, brown-to-black or large circular lesions occur following wet weather.

Once “Phytophthora Parasitica” is present in the landscape, it will remain dormant in the soil and recur to afflict plants annually. Some Landscape Managers have reported that if the pathogen is detected early enough and replacement plants are available, treatment with fungicide and replanting the affected area offers good results. Effective fungicides for the control of “Phytophthora Parasitica” include – SubdueMaxx; Alliette; Terrazole; Alude; Heritage; and Compass, best practice to ensure succesful treatment is to refrain from the placement of susceptible plants in the afflicted area for a few years.